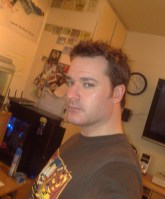 A Proper blog and Glasto...

Yes, yes, I know it's been a while since I really blogged but the live videos I am posting on Qik GAD123 hopefully have made up for it a little! It's the Glasto weekend as I am sure you are all aware, I normally got to a buddies house and camp out, listening to the festival and partying until the small hours but it not on this year. I did it for 10 years and it was one if not THE best weekends of the year. I missed it last year and Paddy passed away so it was cancelled. So just to let you know I will be thinking about Neil, Don, Mike and everyone else this weekend! The coverage is great on the BBC, with a line up that I can pick 10's of acts I wanna see! So it will be cider for me from when I get up tomorrow, kicking off with the Adam and Joe show on BBC Radio Music 6 and heading through until I pass out at like 6am, lol! Also it my Nieces birthday and she is having a party here, so I am DJ'ing for a bunch of 10 year olds apparently, all afternoon!!

So a quick catch up then. My broadband is dying a death, only getting 1mb, which sucks. Obviously been contacting Tiscali but can't get them to sort it out and as far as I am aware they are attempting to sell the company off, so that does not help! Listened to a lot of Sonar last weekend, I remember first catching it on the John Peel show years ago. Now that's a festival I love love to get to! Would also love to hit Belsonic in Belfast but don't, at this stage know if anyone is going, Friday's line up is cool! Again tho, BBC has that covered if I don't make it! Been playing a bit of poker, still reeling from that scary, crippling call last time from Magic on a straight, that hit *sigh* Football has been great, I tipped Spain and they are in the final, so that's my Sunday evening sorted! New CD's I have been listening to and am going to listen to next week include; Dan Le Sac VS Scroobius Pip - Angles, Sigur Ros - Med Sud Eyrum Vid Spilum Endalaust and Seu Jorge America Brasi! I am totally skint, bought a new suit for job interviews and heading to England next month to push forward that opportunity! I know that was short and sweet but I am off out tonight. I will be comatosed for the rest of the weekend so will see you on the other side! Have a good one folks!

TODAY'S LINKS :: FAMEFOR15.COM INTERNET TELEVISION LIVE AND INTERACTIV :: MOSH is a way to fill your phone with safe, free, mobile content :: Showing your contacts on a map :: Badboybrian69 Space - A buddy brian! :: Now you can carry your favorite computer programs along with all of your bookmarks, settings, email and more with you

There are no comments to this entry.

Bravenet Blog
Get One For Free!
powered by